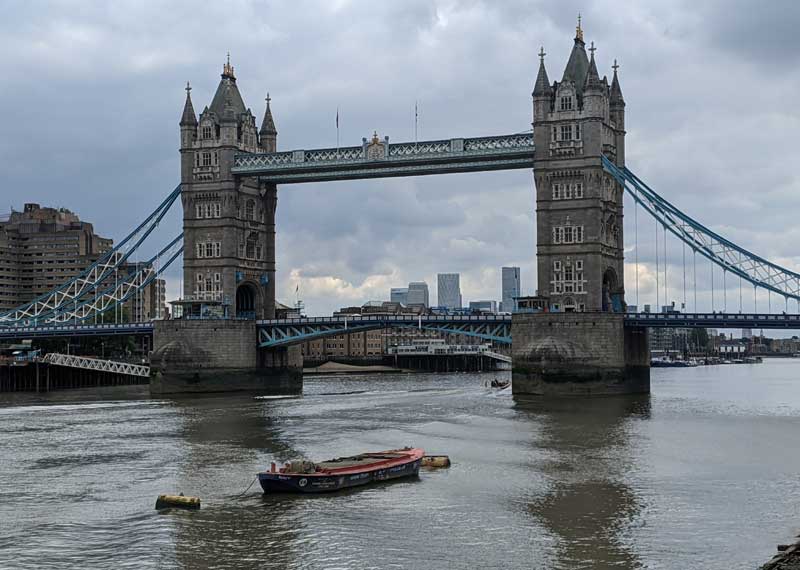 A visit inside the magnificent Tower Bridge, London

Tower Bridge is one of London’s most iconic sights and even if you haven’t seen it in real life, you’d probably recognise it from photos or films.  Not only is it one of London’s most beautiful bridges, but also an amazing feat of Victorian engineering which lifts throughout the day to allow tall ships to pass under.

But, have you ever stopped to consider how Tower Bridge works or what it looks like inside the towers?  During our recent weekend in London, we went on a visit inside Tower Bridge to find out.

Tower Bridge spans the Thames from Southwark to Tower Hamlets.  Opened in June 1894, the bridge was ahead of its time in terms of engineering.  It was built to join the two sides of the river, without disrupting the flow of London traffic.

It required a bascule and suspension design so that the bridge could open for passing ships on the Thames.  The result was an amazing movable bridge that is now one of London’s top landmarks and best places to visit.

The design by the city’s architect, Sir Horace Jones, was clearly a success as now over 50, 000 people cross the bridge (some in buses!) each day.  It still opens about 30 times a week to let ships through, though this was as much as 30 times a day when it opened.

Without Tower Bridge, the traffic of London would come to a standstill.

You can walk or drive over Tower Bridge for free, but if you want to go inside you need to buy a ticket (see at end for prices).

Tower Bridge is not to be confused with London Bridge, which is the next bridge down the river.  In 1968 a billionaire tycoon from America made that mistake and bought London Bridge in error.  Nevertheless, he dismantled the bridge and shipped it back to Arizona, where it is now a famous landmark.

Let’s look at what you can expect to see on a visit inside Tower Bridge.

The tour inside Tower Bridge starts with a big climb up the gothic-style North Tower.  206 steps to be precise!

However, you’ll find lots of fun facts on the walls, so you’ll have plenty of excuses to stop and catch your breath.  Plus, you’ll get to discover everything you could ever need to know about the building of the bridge in child-friendly terms.

Don’t worry, for those who can’t access the stairs, there’s a lift.

7 fun facts we learned about Tower Bridge in London: –

At the top of the North Tower, we proceeded to the West Walkway.  Now, for the fun part – the glass floor!

The glass walkway is a large glass panel in the floor of the bridge.  From here you can look down on the boats, traffic and people crossing the bridge from 33.5 metres above the road.

Funnily enough, the kids were extremely apprehensive about stepping onto the glass and one even walked right round it.  I guess it is fairly hair-raising if you haven’t seen photos before.  Luckily, after some persuasion, they were back sitting, lying, and even running over the panel.

There is a mirror above so you can take some cool selfies.  Luckily, we had the glass walkway to ourselves so could take as long as we wanted.

Whilst you’re there it’s a great location to get some fantastic views of London’s skyline.  We had a birds’ eye view of many iconic buildings, including the Shard, the Gherkin, St Katherine’s Docks and of course the Tower of London.

Once over the bridge we had a look at some exhibits about the divers who built the foundations for the bridge, before descending the South Tower.  It was certainly a lot easier on the way down!

To get to the engine rooms, we completed crossing the bridge, following a blue line on the ground.  As you’re looking down you can read the plaques commemorating the Tower Bridge workers.

Inside the engine rooms you can see all the original Victorian machinery used to operate the bridge.  Everything is extremely large, colourful, and very shiny.

We learnt about the technology used to power the bridge lifts, from the boiler room to the bascule drive engines.  Quite honestly the science was lost on me, but my budding young engineers loved it.

However, I did enjoy the human element of the exhibition and the stories of the workers who used to operate the machinery.  In 1894 a team of 80 committed people were on hand to manage the steam engines.  Today it is a team of 12, who can open the bridge at the touch of a joystick.

The tour inside Tower Bridge takes about one hour in total.  It’s good value for money and was enjoyed by all the family.

Places to visit near Tower Bridge

After your visit to Tower Bridge, you’ll be in a great location to visit some of London’s other top landmarks.  As well as the Tower of London, you are also walking distance from St Paul’s Cathedral, the Monument, and St Catherine’s Docks.

You could also cross to the other side for some of the attractions on the South Bank, such as the Globe or the Tate.

Practical information for a visit to Tower Bridge, London

Where is Tower Bridge?

Tower Bridge is right next to the famous Tower of London, so if you’re new to London you could combine a visit to both.

The address is Tower Bridge Road, London, SE1 2UP.

The closest train and tube station is Tower Hill, which is just over 5 minutes’ walk to the bridge.

It is free to cross Tower Bridge, but you will need a ticket if you want to explore inside. Family tickets are currently £28.

If you are travelling by train you will be able to get a 2 for 1 discount.  Click here for National Rail’s Days Out offer.

Have you been inside Tower Bridge?  We’d love to hear your comments below.

Pin for later:  A visit inside the magnificent Tower Bridge in London

A walk to the enchanted Wistman’s Wood, Dartmoor

I think I visited the inside of Tower Bridge when I was a little kiddo, but can’t remember much. Your post makes me think Ellie & I should visit again. It’s one of the most iconic landmarks of our beautiful city after all.

Oh you should – even if it’s just to walk across the glass walkway!