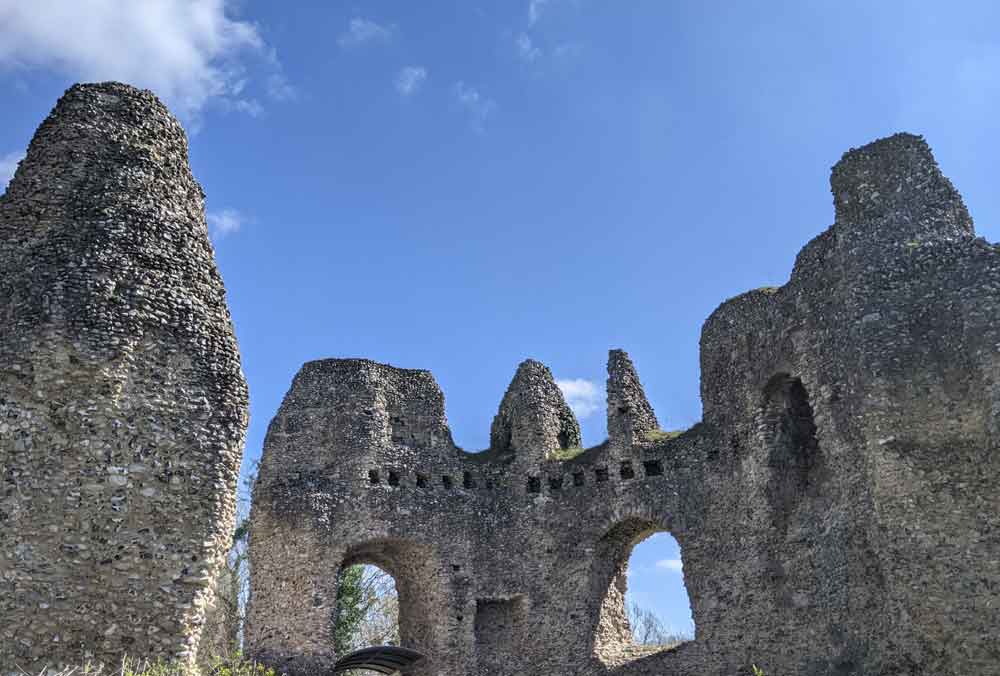 A visit to historic Odiham, Hampshire

Odiham is a large village in Hampshire that is bursting at the seams with historic buildings.  Not only does it have its own 13th castle, but many other significant sights and attractions, dating back to Saxon times.  This week we made our first family visit to historic Odiham to see what it is like.

Within minutes it’s clear that not only does Odiham have a very rich heritage, but is also extremely picturesque.  Read on to find out about how we spent a day out in Odiham.

A visit to Odiham Castle

We started our visit to Odiham with a trip to the castle.  Often known as St John’s Castle, the 13th Century Odiham Castle is in a picturesque setting by the Basingstoke Canal.

However, at over 800 years old the castle was built many years before the canal was even there.  Its location can more likely be attributed to its convenient position between Winchester and Windsor.

Odiham Castle was built between 1207 and 1214 by King John of England.  Unfortunately, a few years later the castle was subject to a two-week siege, in which rebellious landowners waged war against King John.

Despite the French attack, Odiham Castle continued as an influential royal household until the 1500s.  Afterwards it became a hunting lodge, before falling into disrepair.

Today Odiham Castle is in ruins.  However, you can still see how thick the walls were and imagine how imposing it would have looked in its time.  There is an information board in front of the castle, highlighting the original octagonal shape of the keep.

Odiham Castle remains an impressive historic attraction and its pretty waterside location makes it an ideal picnic spot.  You’ll find several benches and logs around the perimeter and additional seating overlooking the canal.

Admission to Odiham Castle is free and it’s open every day.

You can get to Odiham Castle by parking in Tunnel Lane.  Cross the bridge and Odiham Castle is a 5-minutes’ walk along the canal.

A circular walk around historic Odiham

After lunch at the castle, we took a stroll along the canal, before collecting the car and heading to Odiham town centre.

We started our circular walk by the Waterwitch Pub at Canal Wharf, another scenic spot on the Basingstoke Canal.   From here we headed straight to the High Street. Before leaving I had downloaded a treasure trail, so the kids had directions to follow and lots to look out for.

You can walk along Basingstoke Canal to Odiham, but we wanted to save our energy for town.

Reaching the end of the High Street we turned left at the roundabout and took another sharp left after The Crown pub.  This took us to a country footpath running parallel with the High Street.  It led directly to the beautiful All Saints Church, which dates to the 13th Century.

In front of the church, we found the original stocks and whipping post used in the 18th Century.  Historically the stocks were in the village centre to “encourage virtue and punish misdeeds”.  People would be publicly punished for minor misdemeanours, including blasphemy, cheating and drunkenness.

This area, The Bury, located around the church and pub, would have been at the heart of early Odiham.  Today it still contains the old pub and a row of timber-frame houses looking onto the street.

One of the most important buildings in Odiham is at the far end of the cemetery.  Built in 1600, the Pest House (or Plague House) started as a dwelling house for the poor.  However, it soon became a place to isolate travellers with infectious diseases, such as the plague or smallpox.

The last resident of the Pest House died in 1930s, but the Odiham Society have since restored this quaint little house as a mini heritage centre.  Visitors can go in to see the one room with its brick fireplace and sparse furnishings.

The Pest House in Odiham is a Grade II listed building and is significant as it’s one of only five remaining in Great Britain.

Also behind the church are The Old Court almshouses.  These Grade-II listed buildings were founded by Sir Edward More in 1624.

Another of Odiham’s important historical buildings is Bridewell.  Built in 1743, it was one of Hampshire’s first prisons.  However, it converted to a police station and magistrate’s court.

Today the building is home to Odiham’s library.  Bridewell also houses the Odiham embroidery, a commemorative artwork for the 800th history of the Magna Carta.  It is believed King John rode from Odiham Castle to head for Runnymede for the signing of the Magna Carta.

Unfortunately, we couldn’t go in, so didn’t get to see it.

We returned from The Bury to the High Street via the quirky, medieval Stoney Alley.

Odiham High Street has a great choice of independent shops, restaurants and cafés.  It gives the village a unique charm and looks lovely in Spring with cherry blossom trees in bloom.  We enjoyed our visit to Odiham and will return again when we can hire a kayak.

Odiham is in North West Hampshire in South East England.  It is easy to get to via the M3 and is just a few miles from junction 5.  The sat nav postcode is RG29 1LP.

You can park in the free car park at Colt Hill near Canal Wharf or in the High Street.

If you are going by public transport, the nearest train station is Hook.  Trains run regularly from Waterloo and take about an hour. From Hook station you can take a taxi or the number 13 bus.

Have you been to Odiham?  We’d love to hear your comments below.

Pin for later:  A visit to Odiham, Hampshire

A visit to West Green House Gardens in Hampshire

Things to do in Chichester, West Sussex