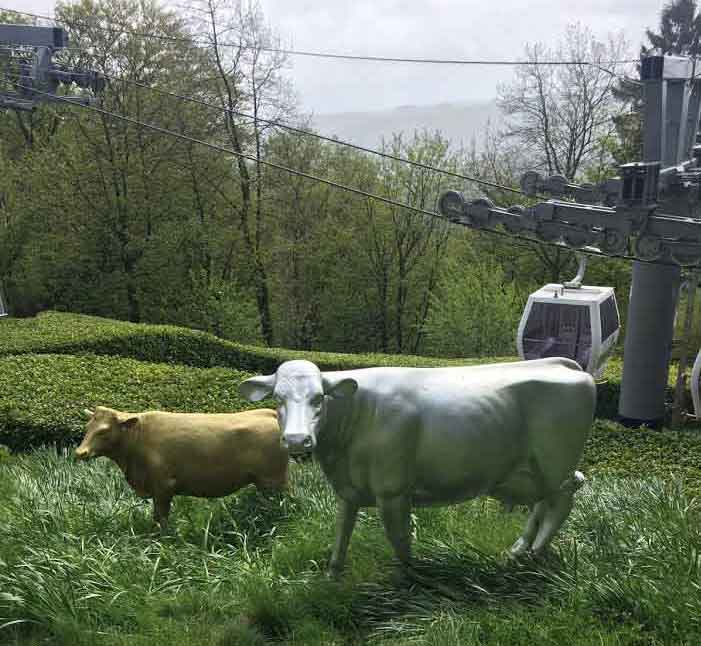 A visit to Matlock Bath, Derbyshire

A visit to Matlock Bath, Derbyshire is a must-do if you are visiting the Peak District for the first time.  It’s very accessible, as it’s at the edge of the Peak District National Park and has many family-friendly natural and historic attractions.

A visit to Matlock Bath

Matlock Bath started life as a mining town.  However, after the discovery of warm springs near Matlock in 1698, the gentry started visiting to sample the thermal waters.  Before long, Matlock Bath evolved into a fashionable spa town and a popular tourist destination.

Later, with the arrival of the railway in 1849, tourism opened to day-trippers too.  Matlock Bath reached the heights of its popularity in the Victorian era when it became known by the poet Lord Byron as “Little Switzerland”.

What can you do on a visit to Matlock Bath?

Check out the High Street

Nowadays, Matlock Bath has a seaside resort vibe, with a promenade of cafés, gift shops and amusement arcades.  There are also more fish and chip shops than you could ever imagine in a town so far from the sea!

As well as an abundance of fish and chip shops, Matlock Bath has its own aquarium.  A beautiful Victorian building in the centre of the High Street houses Matlock Bath Aquarium and Exhibitions.

Here you’ll find a collection of over 50 species of fish, including a thermal pool with giant Koi Carp.  Children can even feed the fish with food from the poolside vending machines.

Additionally, kids can enjoy the gemstone and fossil display and one of the largest public displays of Holograms in Europe.

Matlock Bath Aquarium is usually open until the end of October and only costs £3.30 a visit.

Take a stroll round Derwent Gardens

If you want a relaxing stroll away from the bustling High Street, head for Derwent Gardens.  These pretty formal gardens follow the River Derwent on the southern side of Matlock Bath.

Children will love the many water features along the route.  These include an ornamental fountain, cascades, and little ponds, with water flowing from Matlock’s natural springs.  You’ll also spot several follies and grottoes.

You can enjoy plenty of wildlife along the riverbank and at the right time of year, you’ll be able to spot tadpoles.

Cross the bridge to the Lovers’ Walks

For a more challenging walk, you could try Matlock Bath’s famous Lovers’ Walks.  This pretty, riverside walk, takes you across the Jubilee Bridge from the Derwent Gardens and up the cliffs.

The original Lovers’ Walks was created in the 18th century and has been in continuous use since then.  It’s a steep climb, but you’ll get spectacular views of the surrounding countryside.

Walk from Matlock Bath to Matlock via High Tor

We chose to go in the other direction via High Tor to the neighbouring town of Matlock.

After a very steep ascent from the cable car terminus in Matlock Bath you’ll reach the clifftop trail which takes you all the way to Matlock. Once you are at the summit, the trail is flat, but it’s certainly a tough climb to start.

The trial leads through High Tor, a limestone crag, from which you can survey the whole valley.  You can get a close-up from the precarious “giddy edge”, an unfenced viewpoint at the edge of the cliffs that looks down over Matlock Bath.  We could spot Riber Castle in the distance across the valley.

Eventually, we stopped for food and drinks in Matlock, before returning via Dale Road.  There’s only 1 mile between Matlock and Matlock Bath.

The cliffs at High Tor are hazardous in places, so could be unsuitable for younger children.

Ascend the Heights of Abraham

A visit to Matlock Bath would not be complete without a trip to The Heights of Abraham.

This popular tourist destination was once a Victorian country park and has welcomed visitors since the 1780’s.  Today it is one of the best things to do on a visit to Matlock Bath.

One of the highlights of the visit is getting there.  You access the Heights of Abraham in a cable car ride across the river to the top.    Once up, there is plenty of attractions to entertain visitors.

Firstly, we went on a guided tour through the Great Masson Show Caves.  This underground tour follows the footsteps of former lead miners to discover what their working day was like.  The park has two caves, the Great Masson Cavern, and the Great Rutland Cavern, both mined for lead since Roman times.  Entrance to these caves is included in the entrance price.

Next, we climbed the spiral staircase of the Victorian Prospect Tower, built in 1844 to honour Queen Victoria.   Other attractions to look out for are Tinker’s Shaft and the Fossil factory.

If you are visiting with kids, there are also 2 woodland adventure playgrounds, with slides, rope walks and a climbing tower.  Plus 3 quirky life-size cows to look out for.

A great way to enjoy more of the Derbyshire countryside is to do a bike ride.  We picked the Monsal Trail, a former railway line as it’s completely flat and traffic-free.

The start of this family-friendly cycle route is about 30 minutes drive from Matlock Bath.  It’s an ideal track for a ride or walk with children and has lots of tunnels to add some interest.

We hired our bikes and helmets at Hassop Station, but you can start the other end at the Blackwell Mill Cycle Hire.  There is parking at both ends.

To find out more about our the Monsal Trail, read our post:

Gulliver’s Kingdom Resort is a family theme park aimed at 3-13-year olds.  It has a wide range of rides and attractions for kids, including a Drop Tower and Pirates’ Play area.

If you are on a visit to Matlock Bath with kids, this would be a fun day out.

On the way back from the Monsal Trail, take time to visit the charming village of Bakewell.  This is about 20 minutes’ drive from Matlock Bath.

Bakewell is the largest town in the Peak District National Park and is famed for its unique pudding, Bakewell Tart.   You’ll find a choice of shops selling the traditional Bakewell Pudding, including The Old Original Bakewell Pudding shop.

After a wander round the town, head to the banks of the River Wye, which flows through Bakewell.  The vehicle bridge is a Gothic five-arch bridge has been bringing traffic to town for hundreds of years.

However, in recent years Bakewell’s Weir Bridge has been attracting the tourists.  Now known as the Love Lock Bridge, hundreds of padlocks adorn the bridge, declaring the everlasting love of couples who have visited.

This is a picturesque area and perfect for a riverside walk.

We hope you enjoyed reading about a visit to Matlock Bath.  Please comment below if you’ve tried any of these attractions.

Pin for later:  A visit to Matlock Bath, Derbyshire (with Kids)

7 reasons I want my children to get bored during lockdown

A visit to Hever Castle & Gardens