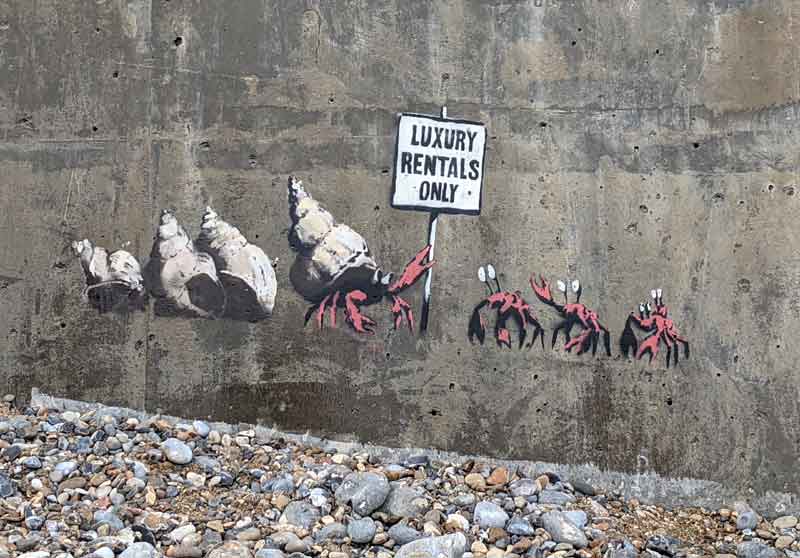 This is a family-friendly walk which follows the coast from West Runton to Cromer in North Norfolk.  In this guide we share details of the walk, the three beaches and best things to do in Cromer with kids.

The walk from West Runton to Cromer follows the route of the Norfolk Coast Path.  This is a long-distance trail, which runs for 84 miles from Hunstanton to Hopton-on-Sea.  You can also walk along the coastal path on the cliff top, but our walk was with ten kids so took the beach route!

A walk from West Runton

Our walk to Cromer starts at the car park in West Runton.  There is a managed car park just 5 minutes’ walk down a slipway from the beach.  All day parking costs £3.  If you prefer to follow the cliff walk, the route starts at the Seaview Beach Café.

West Runton is a shingle and sand beach, with lots of rock pools.  We walked in the morning, when the tide was out, and the beach was empty.

From the slipway, we turned right and walked in an easterly direction.  The damp sand was flat and reasonably easy to walk on, though it’s best to wear trainers or sturdy shoes.  You shouldn’t walk too close to the cliffs, as there is a risk of rocks falling, but the kids did find one large sand slide that they just couldn’t resist.

After about a mile you will arrive at East Runton beach.  This is a sandy, unspoilt beach, which is ideal for children.  This beach also has lifeguards on duty and access to the sea is easier for swimming, as you don’t have to cross the rockpools.

On the beach you will find a World War II pill box half-buried in the sand.  The brick bunker was built around 1940 as a defence against enemy invasion but has since fallen from the cliffs.

For most of the walk you will see the famous Cromer pier in the distance.  It does look deceptively closer than it is, so if you are with younger children, you could start your walk in East Runton.

There is a pay and display car park at the top, as well as toilets and ice-cream van.   East Runton is also dog-friendly.

As you approach Cromer, you’ll spot the pretty beach huts.  At this point you can climb up onto the Promenade and walk along the concrete path.

Cromer is a lively seaside resort, with lots of family attractions.  As you approach the town you will pass a pirate ship play area, a small helter-skelter and several rides.  There’s a good choice of cafés and takeaways in Cromer, but we stopped at the Rocket House Café.

The Rocket House Café is above the RNLI Henry Blogg Museum.  This is a small family-friendly museum with a collection of maritime exhibits and information about the Cromer RNLI crew.

The café is good for big groups, as it has plenty of space upstairs and a balcony with views overlooking the beach and pier.

One of the best things to do in Cromer is take a walk along the pier.  Cromer Pier is a Grade-II heritage pier.  It is free to get on and you can walk to the end for some fabulous views looking back at East Runton.  It is also a popular crabbing area, but it’s a long way to bring your crabs back up.  At the end of the pier is a theatre.

A Banksy in Cromer!

We extended our walk slightly by walking up the other side of the esplanade to find the Banksy artwork.  You’ll find it on the side of a groyne about 100 metres down the East Prom.

It’s a rather fitting piece of hermitage crabs, which are synonymous with Cromer.  This stylish piece of street art is one of the Banksy collection depicting scenes from British seaside holidays.

After a quick look round the town and visit to the pier, we retraced our steps to West Runton where we stopped for a picnic and some rock-pooling.

West Runton is one of the best rock-pooling beaches in Norfolk and children love searching for crabs and little fossils.  In fact, West Runton rose to fame in 1990 when an ice-age Steppe Mammoth was discovered in the cliffs.

The ancient mammoth was one of the oldest and biggest fossil elephants ever found in the UK and gave the area the prestigious title as the Deep History Coast.  Since then, they have also found footprints of a prehistoric man on the Norfolk coastline.

West Runton is a Blue Flag beach, with its own RNLI lifeguard station and lifeguards.   However, if you are going in the sea you might take beach shoes as it can be rough underneath.

It is also a dog-friendly beach, though there are some restrictions in the summer.  From May to October, they are banned to the east of the slipway.

Getting to West Runton, Norfolk

West Runton is in North Norfolk in the East of England.   You get get there by car on the A148.

There is a train station in West Runton, with hourly trains from Norwich.

Have you done a walk on the Norfolk Coast Path?

We’d love to hear your comments.

For other ideas of things to do in Norfolk, you can read:-

Pin for later: A walk from West Runton to Cromer, Norfolk

A fantastic walk from Haytor Vale to Hound...