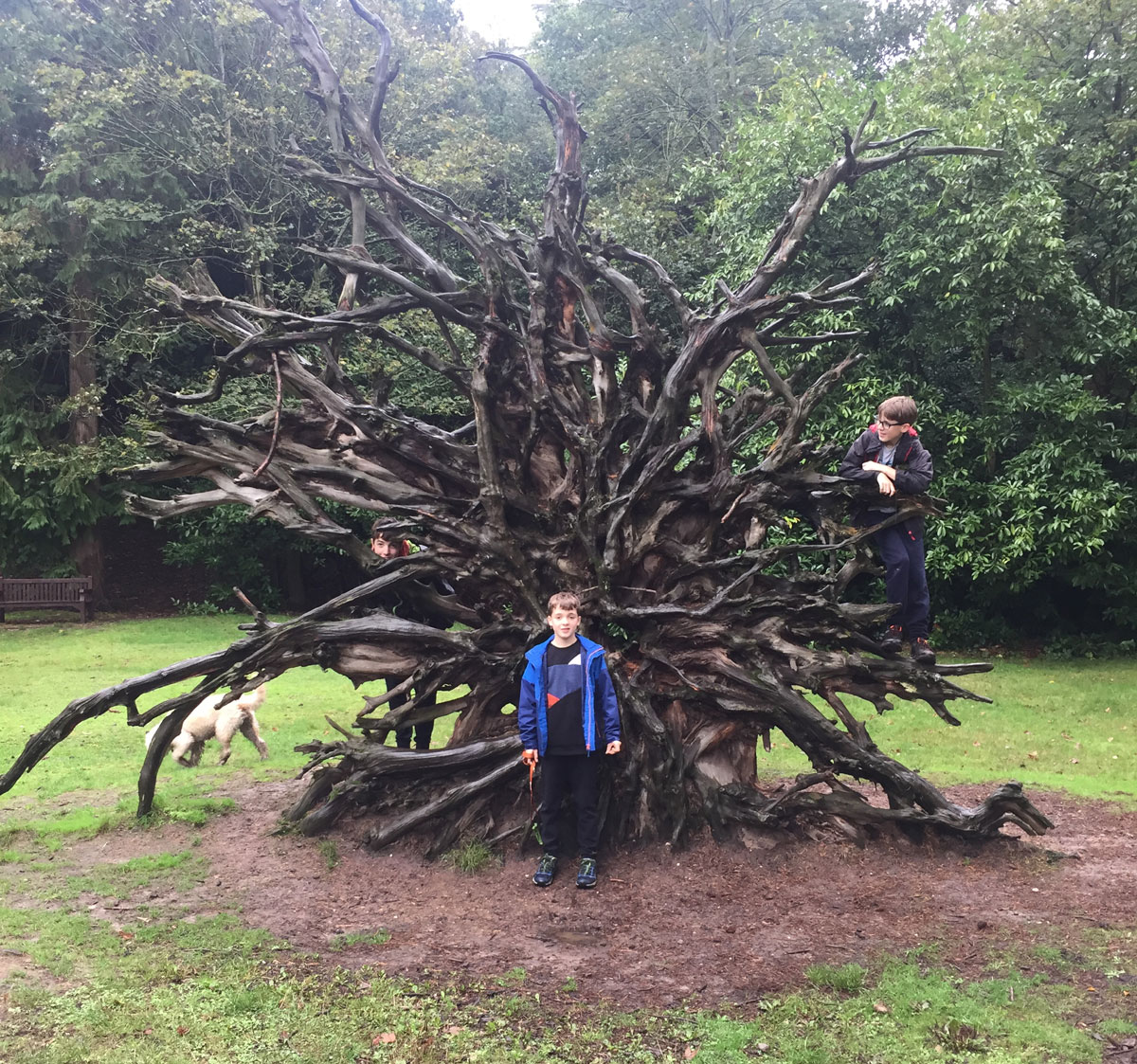 If you are planning a picturesque woodland walk in Surrey, a walk up St Ann’s Hill in Chertsey is a great choice.  If you live in North West Surrey, St Ann’s Hill is ideal for a walk with kids or somewhere to take the dog.

You can access St Ann’s Hill from St Ann’s Hill Road (KT16 9NL), Chertsey, where you’ll find a small, free car park.  From here you can follow the trail to a wooded park on the hill.  If you don’t live locally, Chertsey is easily accessible from the M3 or M25 at Junction 11.

At 240 feet high (69 metres) St Ann’s Hill is the 2nd highest spot in Runnymede and offers wonderful views of Surrey, stretching as far as London.  It makes a great place for nature enthusiasts, who will love the abundant trees and flowers.  Additionally, anyone looking for a family walk in Surrey will find there is plenty of open space and wooded areas for children to play.

What can you do at St Ann’s Hill?

Quite honestly, you shouldn’t head to St Ann’s Hill if you are looking for a big hike or long walk.  There are plenty of other great walks in Surrey that can offer that, especially by the Thames or in the Surrey Hills.

However, St Ann’s Hill is ideal if you’re looking fora short local walk to stretch your legs.  Or just an outdoor space to get some air and connect with nature.

From the car park, there is a short nature trail  which goes through the trees and circles the crest of the hill. It is only ¾ mile and takes about 40 minutes at a leisurely pace. It starts in some ancient woodland at the lower parts of St Ann’s Hill and leads towards more exotic trees.

St Ann’s Hill is a lovely, natural place and has a good variety of trees and plants and some interesting wildlife.

Click here for our 9 best walks in the Surrey Hills

Stop for a play

St Ann’s Hill is a good destination if you are looking for free things to do in Surrey with kids.  With so many trees,  it is the ideal place for some tree climbing or den-building.  Its woodland setting provides a great natural playground, which kids and dogs will love.

Have picnic in the dingle

Once you have completed the trail, you should head for the dingle.  The dingle is the flat clearing in the centre of St Ann’s Hill between the hills.

If you are looking to extend your visit, this is the ideal spot for a picnic.  There are picnic benches here or plenty of grassy areas.

St Ann’s dingle makes a good place for a play date with kids, as it’s enclosed and traffic-free.  Children can play in the trees or stay in the grassy area for ball games and fun.  The Chimptrip boys thought it was a fantastic location for hide and seek, though you do need to set some boundaries!

In recent years, archaeologists have discovered artefacts from early Bronze Age and Roman times, during their digs at St Ann’s Hill.  Since then, they have been able to piece together a clearer picture of the history of this ancient hill.

Prehistoric man made use of St Ann’s Hill as a perfect defence point and used the hill as a fort.  At that time it was Eldebury Hill.  Later, Bronze Age man used the defensive location to his advantage too and made his home here.

Many years later, it became the grounds for the country home of the aristocratic Fox family.  Eventually, this became their main residence and they moved from London to enjoy the country life.

Nowadays, you can still see the final remains of the Fox’s home.  You can also visit the ruins of the former 14th century St Ann’s Chapel, after which the hill was named.

St Ann’s Hill has had a long and varied history.  However, today it remains an area of natural beauty to be enjoyed by all.

We hoped enjoyed reading this post about a walk at St Ann’s Hill in Chertsey.  If you have any comments or good ideas for local walks, please comment below.

Pin for later:  A walk up St Ann’s Hill, Surrey

Top 7 free things to do in Singapore

The Jewel at Changi Airport, Singapore

In my early youth myself and cousins spent days exploring at st Ann’s hill .and building camps in the woods. Digging dens in the Sandy banks . Using car bonnets upturned as sand sleds down the banks What a place many good memory’s , have since moved to Portsmouth , but returned with my son ,daughter and grand children and they were blown away with it ,
Hope it remains forever

It’s so good to hear you have such lovely memories of St Ann’s Hill. I’m glad your family loved it too.