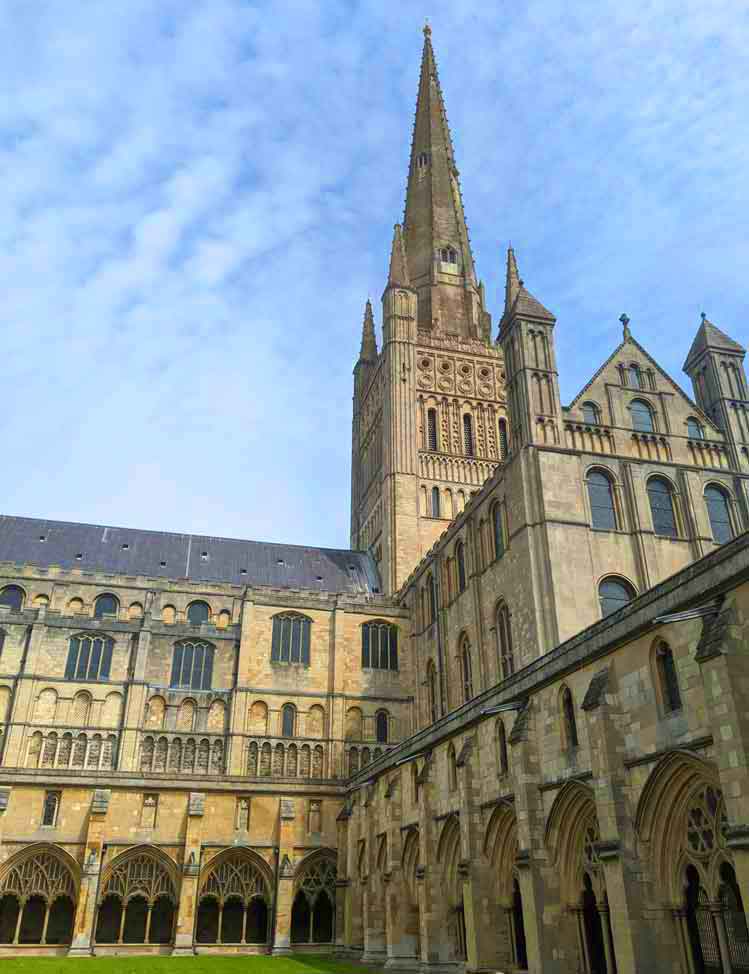 12 best things to do in Norwich

Although we’ve been on many great days out in Norfolk, we had never previously been to the city of Norwich.  We’ve often driven past, and I’ve seen impressive photos of this medieval city, but never had the chance to stop.  So, on the way back from our boating holiday on the Norfolk Broads, we decided to put this right.  We left the Broadland village of Horning at 9am and headed to the city for a day out in Norwich with kids.

Norwich is a historic city in the county of Norfolk in the East of England.  Although it’s now relatively small, Norwich was England’s second biggest and most populous city for more than 700 years.  Norfolk was an important and prosperous area because of its wool trade, which lasted until the Industrial Revolution.

Nowadays, Norwich is one of the best-preserved medieval cities in the UK and you can still see the remains of the ancient city walls.  We spent a day exploring and discovering the best things to see and do in Norwich.

On arrival, we headed across the city, through St Ethelbert’s Gates, to Norwich Cathedral.

It’s hard to believe that this stunning cathedral has been standing for over 900 years, as it still looks magnificent today.  Outside you’ll see two statues, of Nelson and Wellington.  If you look up, you’ll see the second tallest spire (after Salisbury) in the country, which towers over the city.

Norwich Cathedral was built on the site of the medieval Benedictine monastery.  It is still a place of public worship but is open to visitors who wish to explore.  And one of the best things is that admission to the cathedral is free.  This is one of the places you really must visit if you are exploring Norwich.

Once inside Norwich cathedral, there’s so much to take in.  Spend a few moments admiring all the special features.  You’ll spot the enormous copper font, the pelican lectern, amazing architecture, and impressive stained-glass windows.  Of course, the kids were oblivious to all this, as they’d spotted the cathedral cat who was hiding on the pulpit.

Heading out of the nave, we came to the cloisters.  The cloisters at Norwich Cathedral really are awesome and even the kids agreed.  It bears a close resemblance to the film set of Harry Potter, though I think this was actually filmed in Gloucester Cathedral.

After a tour of the cathedral, we headed along Ferry Lane to the riverside.  Norwich stands on the River Wensum, which is a scenic 5-minute walk from the cathedral.

Ferry House was a later addition and was home to the ferryman carrying people across the river.  The name is a tribute to John Pull who was ferryman in 1796.  Although it was previously a pub, it is now a private residence.

Surprisingly, the River Wensum connects Norwich to the Norfolk Broads National Park.  This is the largest area of protected wetland in the UK.  With a network of 7 rivers and 63 broads (lakes), the broads offer over 125 miles of navigable waterways.  And this is all accessible from Norwich.

If you have time, take a boat to explore this expansive area of water.  You’ll get amazing views, see lots of windmills and can stop at some of the pretty villages or nature reserves.

You can hire a boat for a few hours, days or even make a week of it and travel as far as Suffolk.

Alternatively, you can admire the views with a scenic riverside walk.

If you follow the riverside route to the left, you will come to the picturesque Quayside.  In the days when Norwich was an important port, this was the area where fishermen would unload their cargo.  Although the historic warehouses no longer exist, you can still see the pretty 17th and 18th Century houses.

Tombland is not, as you might expect, an ancient cemetery.  Actually, I don’t remember seeing any gravestones there at all.  In fact, it was the heart of Norwich and the site of the old market square before the Normans arrived in 1066 .  Today, Tombland is a vibrant area and home to numerous restaurants, including the Giggling Squid and Prezzo’s, with al fresco dining.

It is also one of the key historic areas for Norwich.  Keep a look out for the wonderful Tombland Alley, a narrow passageway with half-timbered, crooked buildings and wonky doors and windows.  Or the Maid’s Head Hotel, which claims to be the oldest hotel in England.

If you want to visit the oldest inn in Norwich, head to the Adam & Eve pub in Bishopsgate, behind Norwich Cathedral.

Many of the houses used to belong to rich merchants, as the street runs parallel with the river.  Despite falling into disrepair, Elm Hill has been renovated and is now one of the best places to visit in Norwich.

Besides the Briton’s Arms,  Elm Hill is now home to craft shops, bookshops, the Stranger’s Club and even a Bear Shop.

As shopping centres go, they don’t come much more elegant than the Royal Arcade in Norwich.  The design of this prestigious Victorian shopping mall reflects Art Nouveau influences from its architect, George Skipper.

Norwich looks like a great venue for some retail therapy and I really need to return without the boys!  Funnily enough, they were very keen on the Television and Movie Store, the Promised Land for any Star Wars, Dr Who or Harry Potter Fans.

Norwich Castle is an 11th Century Norman Castle perched on a hill looking down on the city.  Judging by the size of the crane outside, some significant improvement works are in hand.

The castle is the oldest building in Norwich.  It was built as a defensive castle under orders from William the Conqueror who wanted a palace for the Normans.  It is now home to the Norwich Museum and Art Gallery.

As you walk around Norwich, you’ll notice a lot of interesting street art.  Norwich has 8 large murals and the boys spotted the brilliant red dragon as soon as we arrived.

In front of the castle is a colourful mural, which depicts Norwich as “The City of Stories”.  This reference alludes to Norwich’s title as England’s first UNESCO city of literature.

You’ll find 12 smaller pieces of urban art in the area near Norwich Market.

Norwich Market square was moved from Tombland after the castle was built.  It is now the largest permanent undercover market in the UK.  You’ll easily spot the brightly-coloured stalls which sell everything!

Norwich also holds the title of the city with the most medieval churches anywhere in the UK.

One of the things I loved about Norwich is the little plaques around the city.  You can learn useful snippets of information about the history of each place from the little signs on the walls.

Getting around in Norwich

One of the best things about Norwich is that it is compact enough to walk everywhere. However, some of the streets are uneven because of the cobbles.

If you prefer to see the city from above, you could get a Hop-on-Hop-Off bus, which includes an audio guide to Norwich.

More things to do in Norwich

As Norwich is so compact, we were able to see loads in a one day visit, but obviously there is a lot more to see.

Outside of the centre is the Sainsbury Centre for Visual Arts, which I know the kids would love.  I, on the other hand, would rather like to sample the  shops and nightlife!

Map provided by Wanderlog, a road trip planner app on iOS and Android

If you want to spend longer in Norwich, there’s a good choice of self-catering accommodation in the city centre.  Weavers Relaxing Townhouse and The Admiral’s Apartment are both within walking distance of Norwich Cathedral.

At the high budget end you could try The Assembly House or the Stower Grange Hotel, which are just outside the centre.

What are your best things to do in Norwich?  We’d love to hear your suggestions below.

*Disclaimer: This post contains affiliate links, which means we may earn some money at no cost to you if you click on one. (Read our full Disclosure Policy)

Pin for later:  12 Best things to do in Norwich

8 of the best Cotswold villages to visit

A review of the Ibis Styles Hotel, Southwark (London)