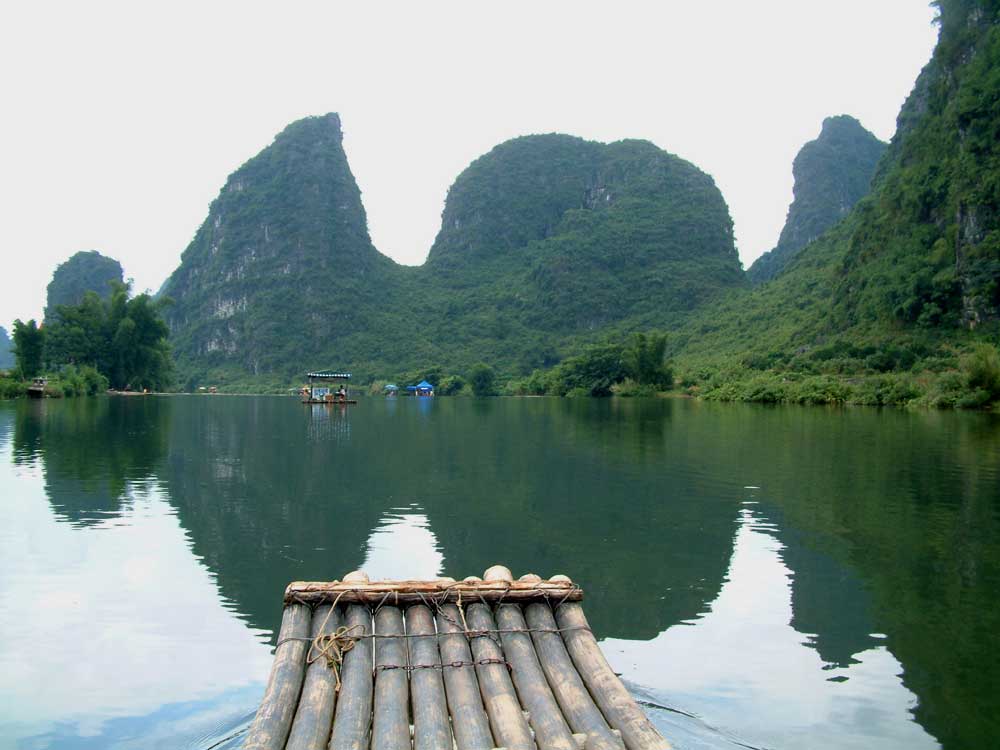 China is a fascinating country with a diverse landscape, intriguing history and unique culture.  It is one of the largest countries in the world and has the biggest population. Our two-week itinerary in China is ideal for first-time visitors who want to enjoy the highlights of China in a limited time.

Our tour took us to many of the must-see destinations in China, including five World Heritage sites.  It’s the perfect itinerary for anyone hoping to see as many of China’s most popular destinations as possible in two weeks.

Our two-week itinerary in China starts in Beijing, the capital. Beijing is in the north-east region of China in eastern Asia. It’s the perfect gateway to China, as it’s accessible from most international airports. We flew directly from the UK, which took about 10 hours.

Beijing is one of the most popular tourist destinations in China and attracts millions of visitors each year. It’s not surprising, as it has so many awesome attractions.

Beijing is bursting with ancient history and has seven World Heritage UNESCO sites.   These include the Forbidden Palace and Great Wall of China.

Three days is just enough time to see the highlights and major attractions in Beijing.

On our first full day in China, we set off to see some of the most iconic sights in Beijing.

Our first stop was Tiananmen Square, the largest city square in the world.  No doubt you’ll recognise the enormous portrait of Chairman Mao hanging from Tiananmen Gate.

From Tiananmen Square it’s an easy walk to the Forbidden City.  Constructed between 1406 and 1420, the Forbidden City was the former Chinese imperial palace.  For over 500 years it was the main home and winter residence for the Chinese Emperors of the Ming and Qing dynasties.

The palace complex is enormous.  In fact, with over 900 buildings and 1,500 rooms you probably won’t see it all in one visit.

We used a licensed guide to show us round and give a potted history of the dynasties.  There’s always plenty of visitors at the Forbidden City, but with a guide you get to jump the queue.

The Forbidden City is extremely ornate and opulent.  When you see the magnificent details in the architecture, it’s easy to see why it’s the world’s most valuable palace.

The Summer Palace, The Temple of Heaven & the Lama Temple

Another of the best temples in Beijing is the Lama Monastery (Yonghe Temple), the largest Tibetan Buddhist Temple in China.

Finally, the last of our must-see attractions in Beijing city is the Summer Palace.  This royal garden was built as a retreat for the Emperors who wanted some respite from city life.  With pretty waterways, temples and pavilions the Summer Palace is the ideal spot for a serene walk.

We are not opera fans and never normally go to the opera in the UK.  However, a visit to the Peking Opera Show seemed like an enjoyable way to enjoy some traditional entertainment.

You’ll get to enjoy bright traditional costumes, dances and singing.  I’m don’t think I’d go for a second visit, but it was a very novel evening.

The Great Wall of China

Of course, you can’t visit Beijing without a visit to the Great Wall of China.  This amazing, ancient wall is over 356 miles (573 km) long and one of the Seven Wonders of the World.

If you want to visit the Great Wall of China with less tourists, head to an unrestored section.  Remember to take some water, as it was really hot when we went and there’s a lot of steps!

Avoid the weekends and Chinese public holidays, as it is even busier at these times.

The Ming Tombs and Sacred Way

The Ming Tombs is a collection of mausoleums, built for the Emperors of China.  The imperial necropolis has 13 mausoleums in total and is aptly known as the Thirteen Tombs of Ming Dynasty.

Each mausoleum has a separate area at the foot of the Tianshou Mountain.  However, only three tombs are open to the public.  The largest of these is the Changling Tomb, which has its own three courtyards.

To get to the Changling Tomb, you’ll walk down the Sacred Way, meaning the “Road leading to Heaven”.  Built since 1435, this impressive approach is lined with pairs of stone statues of mythical animals and officials.

Look out for the life-size lions, camels and dragons standing guard and ready to protect the Emperors in the next world.

Another of the best cities to visit on a whistle-stop tour of China is Xi’an.  Xi’an is one of the oldest cities in China and was one of the Four Great Ancient Capitals.  It is large, busy city, but has a rich heritage and is home to the Terracotta Army.

To get to Xi’an from Beijing, you can take a domestic flight or high-speed train.  The plane takes 2 hours 15 and the train will get you there in less than 5 hours.

Obviously one of the best reasons to visit Xi’an is to see the Terracotta Army.  It had been one of my bucket list destinations, so I was very excited to go.

The museum is 28 miles east of Xi’an and takes about one hour by car.

The Terracotta Army is an enormous burial tomb, built for the First Emperor of China.  It is a collection of over 8000 terracotta sculptures depicting soldiers, horses, chariots, and non-military personnel.  They were buried with Emperor Qin Shi Huang, to provide him with protection in the afterlife.

A local farmer accidentally discovered the army in 1974 whilst digging a well.  Amazingly, the necropolis had lain untouched since the Emperor’s burial 2000 years earlier.  Today the site is a museum.  They have excavated four of the pits, but the main tomb remains unopened to preserve its contents.

You can walk round the perimeters of the giant pits and get a close-up of these life-size warriors.  You’ll notice that that all the sculptures are different, with variations in the facial features, clothes, and hair.

A city tour of Xian

However, there is more to do in Xi’an than just a visit to the Terracotta Warriors.  Back in Xi’an City Centre, you should take time to visit Xi’an’s city walls.  One of the best ways to see the ancient walls is by bike.

We hired our bikes at the South Gate Tower and spent two hours happily cycling the cobblestones of the walls.   The wall is 12 metres high and 8.5 miles in total (13.7km)

Another of the best attractions in Xi’an are the beautiful Bell and Drum Tower and the Wild Goose Pagoda.   The Chinese built this famous landmark in 704 to store Buddhist translations brought back from India by Monk Xuan Zang.

Afterwards you can visit the Muslim Quarter, where you can enjoy some mouth-watering Shaanxi cuisine.

The next few days of our two-week itinerary in China are in Yangshuo, in south China.    Yangshuo is a beautiful smaller town near Guilin, in Yangshuo County.  This countryside stop is a stark contrast to the bustling cities of Beijing and Xi’an.

Yangshuo is a picturesque landscape, renowned for its Karst formations, stunning mountains, rivers and caves.

Yangshuo was one of my favourite places to visit in China, as the landscape is so beautiful.  We chose to explore the countryside by bike, which I can highly recommend.

We went with a local farmer’s wife who led us through local villages and paddy fields.  Eventually we stopped and continued our journey on a bamboo raft for two (with the bikes strapped to the back).

This is a fantastic way to enjoy the Karst scenery and lots of fun, especially when the raft got stuck!

Remember to keep a look out for Moon Hill, a natural arch in the Guilin Mountains, just outside Yangshuo.

On our second day in Yangshuo we explored the town by foot and stopped to enjoy the local speciality, Yangshuo Beer Fish.

If you have more time, you could travel to the nearby city of Guilin.  Here, you can visit the Reed Flute Cave, a limestone cave complex, 3 miles northwest of Guilin.  This underground tour will give you a magnificent display of stalactites and stalagmites, lit by thousands of artificial lights.

The final destination for our two-week itinerary in China is the island of Hong Kong.

Hong Kong is very tourist-friendly and easy to navigate.  It’s part of China, but remnants of its British colonial past are everywhere.  It’s a bustling city with large skyscrapers, bright lights and a vibrant nightlife.

Firstly, we took the tram up to Victoria Peak, for a tasty lunch and the best views in Hong Kong.  Afterwards we browsed the shops in the district of Mongkok and the Temple Street night market.

We spent a relaxed two days in Hong Kong.  After a manic fortnight of visiting monuments and temples, it was good to take some time to browse the shops, markets and enjoy the bars.

Other great places to visit in China

Of course, we knew that we couldn’t see everything on our two-week itinerary in China. However, if I were to amend our itinerary it would include a visit to Chengdu.

Chengdu, in central Sichuan is a breeding centre for Giant Pandas and is home to over 80 beautiful pandas. Pandas are considered as China’s national treasure and the centre is the most important conservation centre for this endangered species.

If I were to add another city to this two-week itinerary, it would be to Shanghai.  Located on the estuary of the Yangtze River, on China’s central coast.  This is China’s biggest city and offers a great blend of historical landmarks and modernity.

Planning a visit to China

Most nationalities will require a Visa to travel to China.   This includes citizens of the UK, EU, USA and Canada.  You can apply for a visa via the Chinese visa application service.  The fees will vary enormously depending on your nationality.

Currently, there are only 14 mutual visa-free countries.

The official native language of China is mandarin, although Cantonese is spoken in some regions.  English is widely spoken in Hong Kong.

China is a vast country, so if you only have two weeks, you won’t want to spend too much time travelling.  One of the quickest and easiest ways to get around China is by plane.  Alternatively you could use one of the high-speed trains to travel between regions.

I hope this itinerary gives you some ideas for your own first visit to China.  If you have any tips, please add to the comments below.

PIN FOR LATER: Our two-week itinerary in China

A visit to historic Odiham, Hampshire

Things to do in Chichester, West Sussex