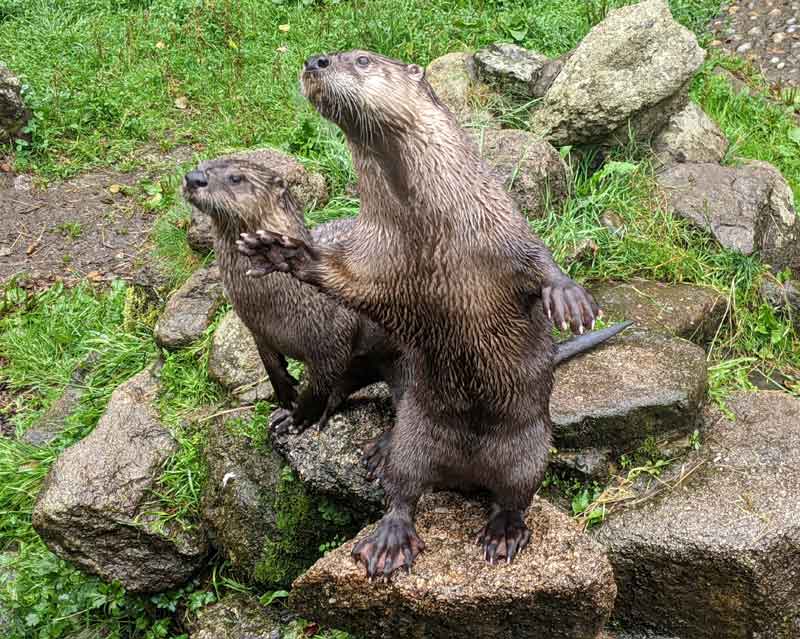 One of the best family attractions in Dartmoor is the Otter and Butterfly Sanctuary in Buckfastleigh.  This small wildlife centre in South Devon is home to both otters and butterflies and is ideal for a family day out in Dartmoor.

Although only small, animal-lovers will love the Dartmoor Otter and Butterfly Sanctuary and it makes a great day out with kids, whatever the weather.  We visited on a rainy morning during our recent stay in Dartmoor.

The otter sanctuary and butterfly house are in two distinct zones.  We adore otters, so started our visit outside with the otters.

When is the best time to visit the Dartmoor Otter & Butterfly Sanctuary?

The best time to visit the otters is at feeding times, as this is when they are most active.  Most otters are nocturnal, so like to sleep after their meal.

The feeding times at the Dartmoor Otter Sanctuary are at 11.30am , 2pm and 4pm.

The otters at Dartmoor Otter Sanctuary

There are 19 species of otter in the world and three of these can be found at the Dartmoor sanctuary.  The different otter species vary significantly in size and habits and live in separate, open-air enclosures.

The British (or European) otters like freshwater and usually live by rivers, streams, and lakes.  These two always like a nap after their food, but you can still watch them asleep with the help of infra-red lights in their sleeping quarters.

You can also see otters swimming underwater in the viewing galleries.  At the sanctuary all the otters can enjoy water pumped directly from the local River Dart.

The wildlife centre is also home to a couple of North American river otters.  These are larger in size than the British otters, but live by lakes, streams and in some coastal areas.  Unfortunately, the numbers of this species are in decline, as they are hunted for their furs.

Everyone’s favourite otters appeared to be the Asian Short Clawed otters.  On first sight, you might think this is a group of babies (or pups), as they are considerably smaller than the other species.

This large group of Asian otters was very frisky and playful, making them more fun to watch.  They were in two enclosures to keep the families apart.

Conservation at the Dartmoor Otter Sanctuary

The key focus for the Dartmoor Otter Sanctuary is the conservation and protection of otters.  When orphaned, abandoned, or injured otters are brought to the centre they are cared for in special facility, until they are ready for release to the wild.  Some live in purpose-built enclosures away from the public, so that they can begin the process of being wild.

Others are bred in captivity or are unsuitable for the wild so remain at the sanctuary.

We had a very good view of the otters, but if you want a close-up, you can pay for an otter experience.  This will give you the opportunity to help with their daily care, feed the otters and go in the pens. A young couple were doing it whilst we were there.

Apparently, several men have proposed during an otter experience!

After our visit to the otters, we headed into the adjacent hot house, for the butterflies.  Buckfast Butterfly Farm is in a tropical green house, with lush green plants.  It is very humid inside, so wear something light.

The butterflies flutter around, so you need to keep your eyes peeled.  There are a few feeding areas where it was easier to spot them.

One of the highlights is the hanging chrysalis.  With some patience, you may see a butterfly emerging from its cocoon.  Astounding.

Other animals to look out for in the butterfly house are the red-eared terrapins and an iguana.

A visit to Dartmoor Otter and Butterflies Sanctuary takes about an hour, if you go at feeding time.  The centre is only small, but this means you can see the animals at closer hand.  It is an ideal all-weather activity in Dartmoor, as much of it is undercover.

The otter and butterfly sanctuary is open every day until 31st October.  The opening hours are from 10.30 until 5pm.

Where is the Otter and Butterfly Sanctuary?

Dartmoor Otter and Buckfast Butterfly Sanctuary are on the outskirts of Buckfastleigh in South Devon.  It is easily accessible from the A38 Devon Expressway.

There is a car park at the train station, where you’ll also find a café and miniature railway.

Have you had a visit to the Dartmoor Otter and Butterfly Sanctuary?  We’d love to hear your comments below.

Pin for later:  A visit to Dartmoor Otter and Butterfly Sanctuary

The Hippodrome Circus in Great Yarmouth: a review