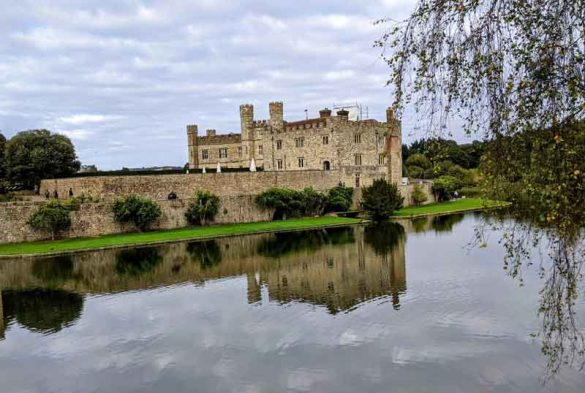 Hailed as the “loveliest castle in the world” it won’t come as a surprise that there are many fantastic reasons to visit Leeds Castle.  This gorgeous medieval castle is set is 500 acres of stunning parkland and has a rich and interesting history dating back over 900 years.

A trip to Leeds Castle is a wonderful day out for history-lovers, but also for families who want to make the most of all the other attractions too.  We visited on our way to Sandwich, during our recent staycation in East Kent.  Read on to discover 8 lovely reasons why you should visit Leeds Castle too!

Of course, one on the top reasons to visit Leeds Castle is the lovely castle itself.  It proudly claims to be “the loveliest castle in the world,” a title once bestowed on it by historian Lord Conway.

Leeds Castle is lovely and steeped in history, but there is a lot of stiff competition for the world’s loveliest.  The castle stands on two islands in a lake, which provides a romantic, fairy-tale setting.

Today the castle is extremely well-preserved and remains as one of the most popular historic buildings in Britain.

With over 900 years of history and heritage, it would be hard to ignore this as one of the main reasons to visit Leeds Castle.  A castle has existed at the site since 1119, when Robert de Crevecoeur established his Norman stronghold.

However, since then it has been a royal palace for King Edward II and served as a royal residence for six medieval queens, including one of King Henry VIII’s wives, Catherine of Aragon.

When you first enter the castle, you can watch a fascinating animation illustrating the many distinct stages of its history.  During its long lifetime, Leeds Castle has served as a fort, a palace, a prison, a Jacobean country house, a Georgian mansion, and a hospital.

In the 1920s, Lady Baillie took ownership of Leeds Castle and spent many years recreating the medieval castle.  She employed the best designers to ensure the interiors were of the highest standards, and you can still see the elaborate design in the rooms today.

If you ask the kids, they’d say the absolute best thing to do at Leeds Castle is the playground.  This is high praise indeed from two young teens, who have almost outgrown their playground days.  The previous contender for best playground was the one at Hever Castle, which is just down the road in Kent.

In fact, there are two castle-themed adventure playgrounds at Leeds Castle.  The Courtyard Playground is for children of 6 years and under and offers sand pits, climbing areas and swings.

The twins headed straight for the Knight’s Stronghold, a playground for under fourteens. They would have happily chased for hours.  The adventure area is on three levels, with turrets, zip lines, rope bridges and climbing walls.

Luckily for me, there is also a central seating area for parents, which is near the café.

Leeds Castle has its own Bird of Prey Centre, with over 30 birds from around the world.  They have a wide variety of owls, and other raptors such as falcons, hawks, and kestrels.

Visitors can walk round the Birds of Prey Centre to see the birds at close hand on perches.  However, the highlight is the falconry display, when you can see the birds in action.

It’s a great experience, which is both educational and fun.  The keepers give a detailed talk about the birds and their habits, whilst the birds fly overhead.  Keep a close eye on the birds, as they do fly incredibly low!

The falconry display takes place at 2pm each day.

Another of the best things to do for children (and adults!) at Leeds Castle are the maze and grotto.

Built with 2,400 yew trees, it’s an impressive maze and not as easy as it looks.  The Chimptrips family love a maze, so were excited to accept the challenge at Leeds Castle.  There are several clue boxes along the way, which help lead you to the rocky outcrop in the middle.

Once you have successfully navigated the maze, head underground to the Shell Grotto.  A subterranean passageway leads to the first chamber, where a small cascade spills from the mouth of a rocky giant.

The grotto is not an artefact from Leeds Castle’s long history, but a relatively new addition to the grounds. Sculptor Simon Verity and shell artist Diana Reynell designed the Grotto in the 1980s to represent the underworld.

Today, it’s one of the castle’s more unique attractions.  You’ll see all sorts of mythical creatures embedded in the walls and ceiling, and all are made from shells and minerals.  Sound and light effects add to the atmosphere.  The only time we’d seen something similar was at the crystal grotto at Painshill Park in Surrey.

To be honest we didn’t have high expectations for the Dog Collar Museum and only went in out of curiosity.  However, we were pleasantly surprised.

Over 130 dog collars are displayed in glass cabinets in two rooms.  However, these are no ordinary dog collars and come in all shapes and sizes.   Some are elaborate gilt collars with delicate engravings.  Others are heavy, iron bands with spikes.  The latter are positively menacing and it’s hard to imagine how any dog could have worn them.

Mrs Gertrude Hunt donated this unique collection of dog collars to the castle in 1977, in memory of her husband.   The exhibits come from all around the world and date back as far as the 15th century.  It is probably the only collection of its kind.

Leeds Castle is set in over five hundred acres of beautiful landscaped grounds, which look resplendent throughout the year.  The estate has trails that follow through woodland and landscaped gardens and it even has its own golf course.

There are several lakes, which attracts a variety of waterfowl. One of the most distinctive birds are the black swans, residents at the castle moat since the 1930s.  The birds are fairly tame and swarm round anyone with food!  You can buy bird feed from reception for £1.

Other things to do at Leeds Castle

In addition to our 8 lovely reasons to visit Leeds Castle, you can also play mini golf or have a try at archery.  There is a small charge for both of these activities.  For those who fancy a treetop adventure, you’ll find a Go Ape centre near the car park.

The grounds and gardens are open 10am to 6pm from April to September (until 5pm in winter).

Leeds Castle has a couple of cafés and a restaurant.  The courtyard near the play area offers a range of burgers and hot dogs.

We took a picnic and found a scenic spot overlooking the lake.

There are plenty of toilets around the grounds and near the castle.

Admission to Leeds Castle is not cheap.  We paid £90 for a family of four.  However, the ticket is valid all year, so visitors can return as often as they wish.

If you want to stay the night, Leeds Castle offers some of the best accommodation in Kent.  Whether it’s the elegant Battel Hall, stylish self-catering cottages, or the bed and breakfast option, you’ll find something to suit.

However, if you want to live like a medieval knight, the Knight’s Glamping is the one for you.  With four-poster beds and wood-burning stoves, this is no ordinary camping experience and something families would love.

Click here for more details on accommodation at Leeds Castle.

Leeds Castle is in Kent in South-East England.  It is about 7 miles (11km) south-east of Maidstone.

Leeds Castle is easy to get to by car.  It is just off junction 8 of the M20, which you can access from the M25 or M2.  The journey only takes about 1 hour from London, so is ideal for a day trip from the capital.

The sat nav postcode for Leeds Castle is ME17 1PD.

You’ll find a large, free parking area at the castle.

If you are travelling by train, head to Berstead or Hollingbourne Station.  You can then take the coach shuttle service to the castle (summer time only).

Have you been to Leeds Castle?  We’d love to hear your comments below.