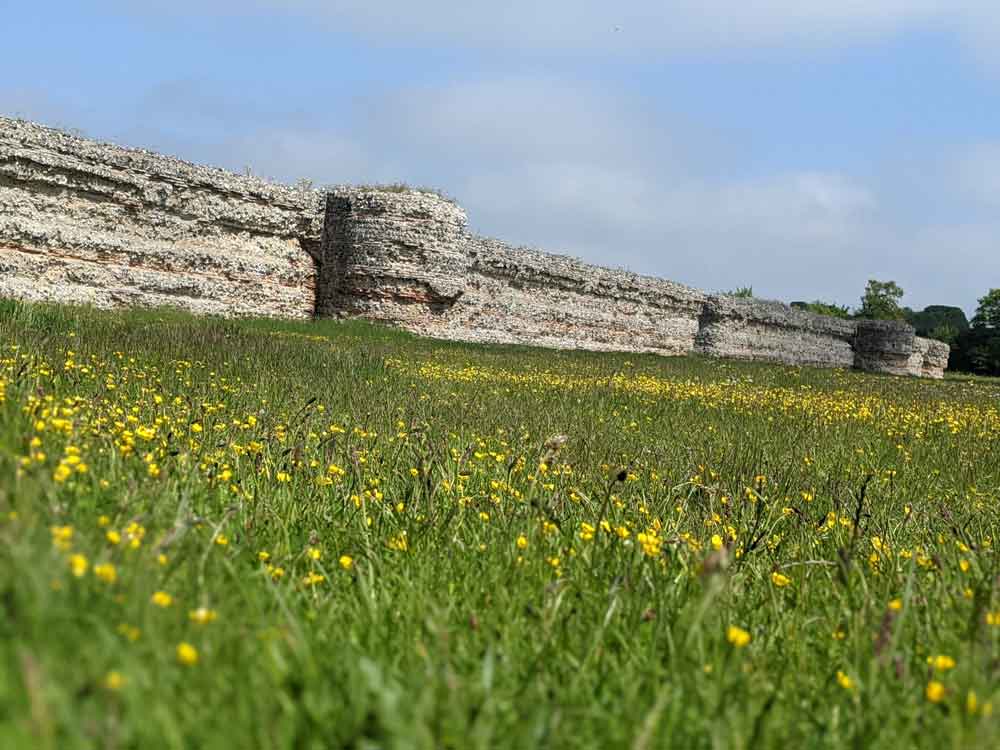 On a cliff overlooking the River Waveney in Norfolk, is one of the most impressive Roman buildings in Britain.  Historically, Burgh Castle Roman Fort was part of a coastal defence system in the 3rd Century AD to protect the area from Saxon troops.  However, today anyone can visit Burgh Castle to see the remaining walls of this impressive Roman Shore fort.

Where is Burgh Castle?

Burgh Castle is 4 miles from the seaside town of Great Yarmouth in Norfolk, near the village of the same name.  It is on the southern side of the stretch of water, Breydon Water.

History-lovers will adore Burgh Castle.  Alternatively, it’s a great place to visit if, like us, you are on a boating holiday on the Norfolk Broads.  Or, if you are hiking on the long distance trail, Angles Way.

How do you get to Burgh Castle?

We arrived by boat and moored at Burgh Castle after crossing Breydon Water.  This is the only route if you’re travelling from the Northern to Southern Broads and is a great resting spot.  From the River Waveney, we followed the Angles Way footpath alongside the river.  At the signpost, we climbed a short flight of steps up to the castle.

However, if you are arriving by car, you can take a short, flat walk from the village of Burgh Castle.  The postcode for Burgh Castle is NR31 3QB.

What can you see at Burgh Castle?

Burgh Castle Roman Fort is one of the best-preserved Roman buildings in England.  The walls are still intact and stand at their original height.  Only three of the four walls remain in a large rectangular shape that covers the size of the field.  Sadly, the west wall disappeared long ago into the marsh.

Along the wall, you can still see remains of the turrets.  On closer inspection of the walls, you’ll also notice the alternating bands of red tiles in amongst the flint.

The fort is open to the public, who can wander round the site at will.  Some useful interpretation boards in front of the walls describe the long history of the fort.

From the site of this ancient fort, you will get fantastic views looking back over Breydon Water and the marshes You will also be able to see the iconic Berney Arms Windmill, one of the tallest mills on the Norfolk Broads.

A brief history of Burgh Castle

Burgh Castle Roman Fort was built by the Romans as part of a defence system against the Saxons.  It was part of a chain of “Forts of the Saxon Shore”, to prevent raids up the river.  The Romans called the site Gariannonum.  The decline of the Roman Empire 100 years later, resulted in the desertion of the Roman fort.

However, it later became an Anglo-Saxon settlement.  Three hundred years after the departure of the Romans, an Irish missionary, Fursey established a monastery within the ruins of Burgh Castle.

Historians also believe it was the site for a Norman castle, though little evidence remains.  However, Roman artefacts have been found and can be seen in the nearby church.

After having a good look round Burgh Castle, we followed a footpath to the village.  On the way you will pass the St Peter and St Paul’s Church.

This medieval church has a Saxon tower and dates to the 13th and 15th Centuries.  It contains many reused Roman tiles, believed to have come from Burgh Castle.  One of the windows in the church is dedicated to St Fursey.

After a quick visit to the village, we returned down to the riverfront and headed for the Fisherman’s Inn pub.  The pub has an extensive, waterside garden and serves food from 12pm.  If you are travelling by boat, daytime mooring is free for patrons.

After lunch we headed in the other direction to explore the other side of the village.  We found the enormous, Burgh Castle Marina and Holiday Village.  There is also a tiny post office and general store.

Another Roman Shore Fort, Caister Fort is just a few miles north-east of Burgh Castle, in Caister-on-Sea.  However, the walls are not as intact as those at Burgh Castle.

How much does it cost to visit Burgh Castle?

Admission to Burgh Castle is free.

What are the opening hours at Burgh Castle?

You can visit Burgh Castle during any daylight hours.

Are there any facilities at Burgh Castle?

No, the castle really does stand on its own in a field.

Have you been to Burgh Castle Roman Fort?  We’d love to hear your comments below.

A family day out in Buckfastleigh, Devon