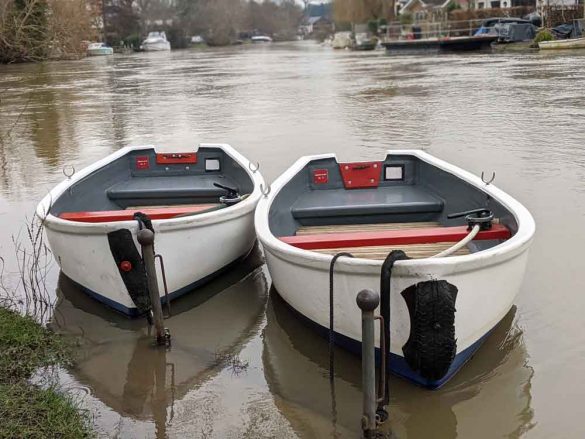 A walk on the Thames Path at Shepperton, Surrey

This picturesque walk on the Thames Path at Shepperton leads to Chertsey Bridge in Surrey.  It’s a flat, gentle walk with plenty of interesting things to look at.  It’s ideal for families or day-trippers from London.  You’ll have a choice of places to stop for refreshments and pretty picnic stops by the river.

As my parents live within walking distance of the River Thames, it’s a walk that I have done many times as a child and now with my own kids.  It’s a leisurely walk with pretty views and plenty of wildlife to spot.

The start of the walk

The walk starts at Shepperton Lock.  However, parking at Shepperton Lock is limited, so it’s best to park at the Manor Park pay and display car park on Church Road (TW17 9JT).  From here you can walk down Chertsey Road, past Shepperton’s pretty, historic Church Square and on to Ferry Lane.  Ferry Lane heads straight down to the river.

If you are coming by train head down the High Street to the Memorial and turn right into Church Road.  You can then follow the directions above.  It’s about a mile in total and takes 20 minutes.

Shepperton is a large village on the River Thames in North Surrey, South East England.  It is only 15 miles south west of central London, so is ideal if you are looking for walk from London.

Previously, Shepperton was famous for its film studios, which are just outside Shepperton in Charlton Village.  They have filmed several blockbusters here, including Bridget Jones’ Diary, Billy Elliot, and Gladiator.

Although its population has significantly increased, Shepperton has retained its village character and still has many independent shops in the High Street.

It also has several riverside pubs, which are very popular on a summer’s evening.  If you head to Old Shepperton, you’ll find an idyllic Church Square, a 12th century church, two historic hotels and a 15th century coaching inn pub.

The walk from Shepperton

The walk from Shepperton to Chertsey Bridge follows a section of the Thames Path.  This is a long-distance walking trail, which follows the River Thames for 184 miles from the Cotswolds to the heart of London.

Our walk follows the river upstream to the neighbouring town of Chertsey.  We started at the top of Ferry Lane.  As you approach the river, you’ll pass Nauticalia, a boat equipment and gift shop.  Nauticalia also has a small coffee shop, The Ferry, so you can grab a drink before you start.

The coffee shop takes its name from the pedestrian ferry at the junction of Ferry Lane and the Towpath.  The foot ferry has been taking passengers across the river to Weybridge for nearly 500 years.  It is the only crossing point if you are walking the Thames Path in the other direction to Hampton.

However, our walk doesn’t cross the river, so we turned right and within 5 minutes we were at Shepperton Lock.

Built in 1813 to alleviate the navigation issues on the Thames in Shepperton, the lock is now a popular place to stop and watch the world go by.  The kids love watching the lock system in operation and seeing the water levels change to allow the boats through.

Plus there’s often an ice-cream van there too, which is always a bonus.  Adults might prefer to wait for their refreshments from the Thames Court pub, which has a prime location overlooking the river

Unfortunately, there weren’t any boats waiting, so we continued on our walk.

The Thames Path from Shepperton to Chertsey

The first stretch of our walk takes you along the Towpath.  It had been heavily raining the previous week, so the river banks had burst over the grassy verges.  This didn’t seem to be a problem for the many ducks and geese here.

Once you get past the pub,  many people choose to walk along the road if it is muddy.  It is a one-way road and is mostly traffic-free and safe.

Although this is a fairly short walk, there’s still plenty of things to see.

In the middle of the river is Pharaoh’s Island, a residential island, accessible only by boat.  Island living is not for me, but it has some impressive houses, with heavenly views of the River Thames.

There are some very quirky riverside houses, canal boats and an abundance of wildlife.  As well as the multitude of geese, we saw a heron, swans and a pair of green parakeets.  There are now about 30 thousand wild ring-necked parakeets living in South East England and we often see these tropical birds flying over Shepperton.

As we got to the end of the Towpath, the road becomes Dockett Eddy Lane and leads away from the river.  Crossing through the gate we continued on the riverside footpath.  It was extremely muddy, but this section of the Thames Path becomes quieter, as many turn back at this point.

This path crossed the Ryepeck Meadow Moorings, where you’ll see a row of permanent house boats.

At the end of this path a gate leads to a grassland area called Dumsey Meadow.  Dumsey Meadow is important as it is the only undeveloped water meadow on the River Thames.  As the area has never been fertilized, it attracts a variety of wildlife and rare plants.  English Nature has designated Dumsey Meadow a Site of Special Scientific Interest, as it is so rare.  One of it’s less rare residents are the herd of cattle who graze here.  I have often seen the cows standing in the river, which I find quite comical.

Dumsey Meadow follows the curve of the river to Chertsey Bridge.  We turned round here and retraced out steps back to Shepperton Lock.

If you are looking for refreshments, there are two pubs by Chertsey Bridge, the Kingfisher, or the Bridge.

Shepperton is easily accessible via the M3.  Get off at Junction 11 (Chertsey) and head for Chertsey Bridge.

If you’re coming from London, follow the A316 to Sunbury-on-Thames.

Direct trains run from London Waterloo to Shepperton every half hour.  The average journey takes about 50 minutes.

From the train station it is about 1 mile to the walk at the River Thames.  You jjust head down the High Street to the memorial, and then follow Church Street until you get to Ferry Lane.

Other walks in Surrey:-

You may also enjoy:-

Pin for later:  A walk on the Thames Path at Shepperton, Surrey

Finding Alice in Wonderland in Guildford