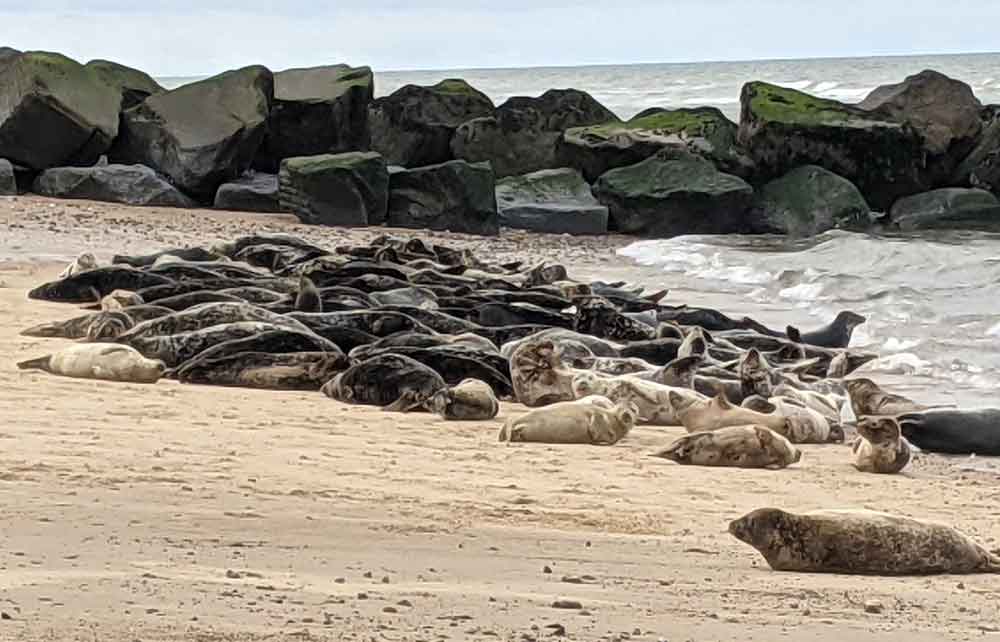 Watching seals at Horsey Gap in Norfolk is an unforgettable wildlife experience, which allows you to observe these lovely marine creatures in their natural habitat.

In fact, Norfolk is one of the best places in the UK to see seals, but despite many visits we’d never previously seen any.  So, during our visit to friends in Norfolk we put this right by going to see the seals at Horsey Gap.

Seals love the gorgeous, sandy beach at Horsey Gap and it’s a brilliant place to see them in the wild.  Plus, our friend is a Seal Warden at Horsey Gap, so knew the best place to spot them.

Read on for our guide to watching the seals at Horsey Gap in Norfolk.

There is a small, pay and display car park at Horsey Gap.  We went late afternoon at the end of the summer and there were plenty of free spaces.  If it’s busy, you can park at the Horsey Gap Windpump, which is about a mile away.  It’s free parking for National Trust members.

From the car park we went through the gate on the right and followed the footpath through the sand dunes.  It was about a 10-minute walk to get to the beach with the seals.

If you are visiting with children, keep them away from the edge as it’s a long drop to the beach.

The seals at Horsey Gap

In fact, the seals were easy to spot as there was so many of them on the beach.  And they exceeded all expectations.  They were utterly adorable!

The seals at Horsey Gap come in all shapes and sizes.  There is a combination of Atlantic Grey seals and some Harbour (common) seals.  The grey seals are larger, with the males (bulls) growing as big as 300 kg.  They also have longer heads.

Another difference between the seals is when they give birth.  Harbour seals have their pups in the summer, and they can swim almost immediately.  Grey seals have their pups in the winter and they can’t go in the water for the first 3 or 4 weeks.  When they’re born their white fur isn’t waterproof, so they must stay on the beach with their family before learning to swim.

To the right side of the beach were some smaller, white seals, who were extremely cute.  After a while we also noticed quite a few seals bobbing in the sea.

I loved watching the seals and their antics, as they are so full of character.  They are also very noisy, especially the larger bulls.  It’s a great experience seeing these lovely marine animals at close hand.

However, it’s important to remember they are wild animals and keep your distance.  It’s recommended that you don’t get closer than 10 metres, as it can be dangerous for you and the seals.

In the busy months you must also watch where you are walking, as somehow the seals can get up onto the sand dunes!

For more information on how to protect seals look at the Friends of Horsey Seals website.

When is the best time to see seals at Horsey Gap?

You can see seals at Horsey Gap all year round, and we saw about 70 on one beach at the end of August.  It was very quiet on the beach, with very few people.

The busiest time to see the Grey seals is between November and January, when they give birth on the beach.  During these winter months you will see thousands of seals.  Just last year, in winter 2020, approximately 2,500 pups were born at Horsey Gap.

As well as lots of seals, you’ll also see lots of people, as visitors flock to see the pups.  During these winter months you can’t go on the beach, as it is too dangerous for the seals.

In the birthing season the paths will be roped off and visitors can see the seals from viewing points on the sand dunes.  If you get too close, the seals could abandon their pups who would starve, or the seals could attack you.

Other best places to see seals in Norfolk

Just next door to Horsey Gap, Winterton-on-sea is another good place to see seals in East Norfolk.  You can also see some in the sea at Brancaster beach.

How do you get to Horsey Gap?

Horsey Gap is in East Norfolk,  on the edge of the Norfolk Broads.  It is just 13 miles from Great Yarmouth and 25 miles from Norwich.  You can get there by car on the A47.

Are there any facilities at Horsey Gap?

No, Horsey Gap is very remote and has no facilities.  However there are toilets, a café, and National Trust gift shop one mile away at Horsey Windpump.

Have you seen the seals at Horsey Gap in Norfolk?  We’d love to hear your comments below.

A weekend in London with kids: a 2-day itinerary